I know...15 is a ripe old age for a dog...He arrived when he was 3 years old...in the winter.  His previous owner was ill and could no longer take care of him.  He was not house trained.  Back then we had our lab, Heidi, who helped us train him.  And at three he was trained in a week...even in the cold.  Though he did used to try to lift all four legs off the cold snow until we bought him boots.  He looked like those lizards on the hot sands.  He was 8 pounds of love.  I used to take him to work when I worked in a local gallery and customers would carry him around loving him.  He was never an ankle biter.  The only command he ever learned was "kennel" and he would run and lie down in his crate.  I tried to teach him "sit" once but he thought I was mad at him and ran off to his crate.  In any case he was so small you couldn't tell whether he was sitting or not. He loved to sit next to Gary or me.  Always on the left, for some reason.  He would tuck in there to keep warm.  And he loved, loved, loved the boys!  When Alex came home he would take him and let him sleep on the bed and when Noah came home he did the same.  Obie was in love with sleeping on beds.

The past couple of years he was deaf and this past year I have had to diaper him because he didn't always have control...This weekend when we were getting Hannah, he went downhill...was retching on Friday night.  I called the vet but he said there was little they would do besides perhaps x-rays and exploratory surgery if he had swallowed something.  We left him in a friend's care when we got the puppy but when we came home he was no better.  By Sunday, I swear he had lost a couple of pounds and we were giving him water with a syringe by mouth.  Sunday night when I brought him out to pee he was so frail he fell over.  Monday we brought him in to the vets and first she gave him a tranquilizer and we put him on a lovely quilt.  She left us with him for a while to say goodbye and then when he was all relaxed she gave him the pink stuff. 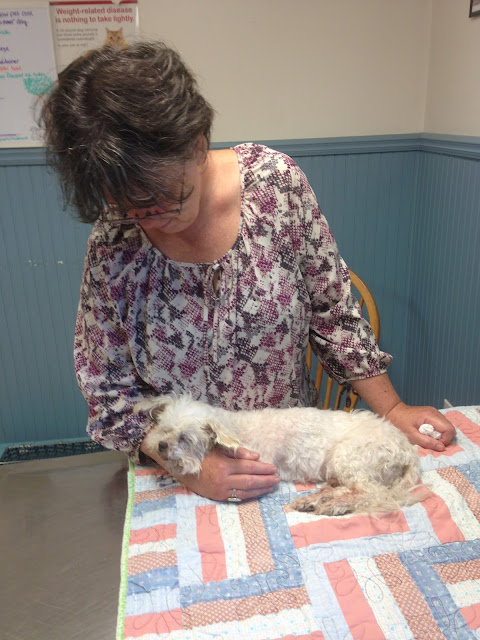